It’s been a funny old week; heralded in by a storm pulling half the guttering off the front of the house which woke us up at 4am, and see-sawed its way into a migraine-filled, dehydrated, wakeful dawn.  Heralded out by winds and rain and my longest ever long run…

The migraine knocked my training out.  It was still lurking on Tuesday and I decided to run on Wednesday, instead, to try to avoid bringing it back to full throttle.  So I did my threshold runs on Wednesday around the flat streets of North Oxford, feeling weak and uncommitted and beating myself up for being a bit crap.  Until I looked at my stats, and realised that actually my times had been far quicker than I usually produce.  Which just adds evidence to the old saw that it doesn’t get easier, you just go faster! 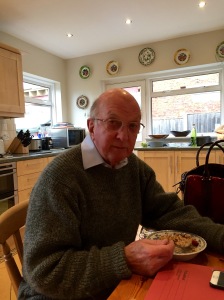 Sleepless nights accumulated, though, and on Thursday I was almost weeping with tiredness, as I set out to drive to my father’s house in Epsom.  We were going to a concert at the Menuhin School, where Dad volunteers as a steward at the concert hall.  Classical music is not my idiom, and I was slightly anticipatory about going to watch other people’s children play instruments they hadn’t yet mastered.  Foolish woman!! I should have done my homework! The concert was incredibly impressive – 16, 17 and 18 year old kids giving amazingly accomplished performances of really technically difficult pieces.  I surprised myself by really enjoying it.  We were accompanied by some friends of Dad’s, who were delightful company, and it was great to see the warmth he’s held in by the concert hall staff, who all greeted him affectionately and stopped to chat.

My plan was to do my hill intervals on Friday morning, before driving back to Oxford to work.  Dad was unconvinced that the plan would work, and was slightly anxious about me running the hills around him, but I reassured him that I would stay on the pavement and be perfectly safe.  In the event, though, I really couldn’t muster any enthusiasm for hills.  Enthusiasm may not be quite the right word, but I was exhausted and uninspired, and so I just left his house and ran and ran and ran and kept going, up hill and down dale.  I only covered about 5km, but it was lovely to be out and free.  And it was *quite* hilly, anyway, on the edge of the South Downs, so I forgave myself the slight deviation from the plan!

The forecast for the weekend wasn’t great; I had a choice of warm but windy and almost biblically wet today, or cold and windy but dry tomorrow.  I’m a bit of a lizard; I’ll take warmth over cold any time, so I decided to let myself sleep until I woke up and then set out.  I plotted a route of almost 10 miles – my longest yet – and resolved to run slow, and just take it gently.  This morning, I ate a light breakfast, slurped down a pint of tea, tuned my phone in to the Audiobook I’m currently listening to – Americanah by Chimamanda Ngozi Adichie – and set off.  The rain wasn’t too bad, but the wind was very changeable, and I was grateful for the advice of a colleague, this week – don’t exhaust yourself by fighting it; accept that it will slow you and keep going anyway.  It was a familiar route out, but I mixed it up a bit by turning left onto the A44, instead of right, and running up to the gates of Blenheim Palace before I turned to run back and meet the ever patient, supportive Mr P in Long Hanborough.  As I ran back through Bladon, there was a sudden huge gust of wind, and the sky dumped a vertical downpour on me.  I found myself laughing, shaking, and *roaring* at the skies… I must have looked (and sounded) like a proper nutter.  But I felt so alive!!! And of course, a run which earns me 20,000 steps in the eternal fitbit competition with the old man, never hurts! Happy weekend, everyone 🙂