So George sent out an email, today.  George’s emails have an infuriating habit of saying just what I need to hear, when I need to hear it.  I guess that’s why he’s the coach and I’m the acolyte, but whatever…

Anyway, this week I have done a Bad Thing.  And it’s the first time I’ve done this particular Bad Thing during this training programme.  The Bad Thing is that I’ve skipped a run.  It was cold (icy pavement cold); and I am crushingly tired; and I wasn’t sure if I was brewing a bug.  So on Thursday, I skipped a run.  I told myself I’d do it later in the day, and then when that didn’t happen, I told myself I’d do it today.  But that didn’t happen either.

And because I’m a sensible, grown up kind of a person, my response to skipping the run has been..?  Eat cake.

So all in all, when George’s email arrived, I really needed to read it.  It was an email about the datafication (no, I’m not sure that’s a word, either) of training.  It talked about reviewing your performance graphs and feeling the motivation of seeing a pretty picture which shows your times dropping, your weight coming down or your squats increasing.  I particularly needed the sentence which read:

“Secondary to all that you’re a little less inclined to MISS a workout or eat all of the things in case it messes up that pretty graph :-)”

That, right there.  That’s what I needed.  A graph with a lovely trend which would motivate me not to do any more Bad Things.

So off I begat me, to Garmin Connect, and looked at my reports.  And do you know what I saw?  Do you??

You do, because that’s the picture, attached to the top of this post.  What I saw was flat lines.  Not dropping; not increasing.  Pancake, pancake flat.  Over the last six months, my average pace, my average cadence, my average speed have all remained EXACTLY THE SAME.

So I had me a little moan at some friends.  Who both, with patience and wisdom and tolerance, pointed out that I’m not training for pace, or cadence, or speed.  I’m training for endurance! And there, reader, I can show an improvement.  My minutes run over the last six months looks like this: 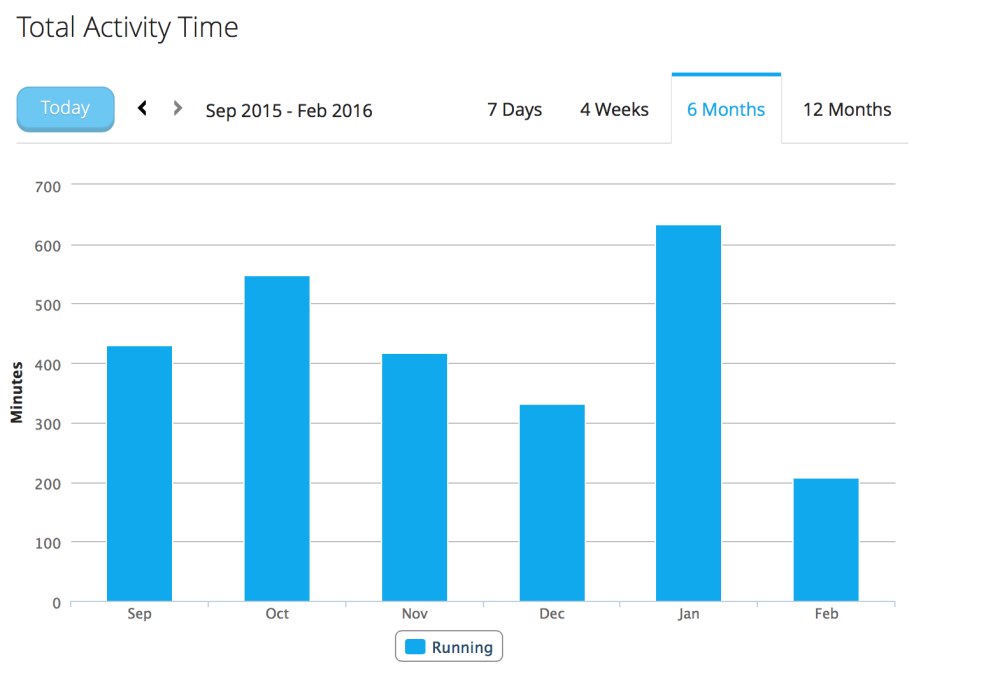 And my total distance run over the last six months looks like this:

So I’ll take the wisdom and encouragement of my friends.  My endurance is increasing.  All that determination is having *some* effect, after all.  Thank you, Rae and Ian! And tomorrow, I will go out and do my long run – dragging some additional cake-filled pounds around with me, as penance for the Bad Thing.  Which, in a perfect illustration of karma’s bite, will further increase my endurance.  Probably.  But also stand in the way of improving my speed.  Almost certainly.