I missed a weekend update.  Which is a shame, because it was actually a bloomin’ good weekend, from a training and pretty much an every other point of view…

I took myself into Oxford on Saturday morning, with the intention of running the route of the Oxford Half Marathon.  My training plan said 140 minutes, and I figured that would be as near as dammit 13 miles.  And I had a Virtual Runner half marathon medal at stake, so…

I had more  or less memorised the route.  As ever, the devil’s in the detail… I was doing great until about mile 6, when I lost my navigational confidence on Marston Ferry Road.  I don’t know Marston or Headington particularly well, and while I had the *shape* of the route in my head, I became less and less confident that I could match that shape to actual roads.  I was trying to decide what to do when a familiar head popped out of the subway between Cherwell School sites.  “Hello!” said the head. “What are you doing here??” and it sprinted cheekily backwards down the pavement ahead of me.  It was one of the chefs 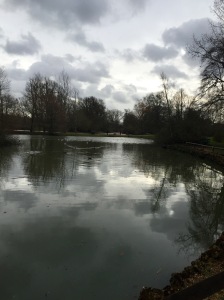 from work, out for a 5km run, and keeping a pace I couldn’t hope to match.  But it was wonderful to see a friend, and I picked up my pace for a short while, before I fell back again and wished him a happy morning.  Shortly after that, I reconciled myself to turning round, and sucking up an extra loop around the University Park, instead.  The morning had been cold and bright, and the clouds were just beginning to gather as I hit the eastern edge of the park.

Once around University Park, I headed back into the centre of town, only to be quickly repelled by crowds of shoppers and tourists, so I headed back to the Park.  It’s never my favourite route, but given the choice of tourists or another lap, I’d choose another lap any day! Just as I was coming up to the southern gate of the park at about mile 10, I was joined by a friend, Amanda, 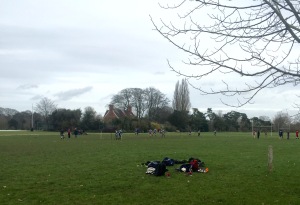 who is busy working her way through the amazing Couch to 5K programme.  She brought her daughter Charlie, a Brighton marathon veteran, and they sweetly and generously kept me company for the next two miles.  Honestly, it was just what I needed to combat the boredom and a creeping cramp in my right buttock… we chatted and giggled our way through my third (or was it fourth?) lap of the park.  Charlie was bemused by the Quidditch match we passed, in early swing – if you embiggen the photo on the right, you can just make out the pale blue hoops, and the players with broomsticks clamped determinedly between their thighs.  I kid you not.  Only in Oxford…!

Amanda and Charlie peeled off at about 12 miles, leaving me just one more to do.  I ‘d hit my 140 minutes by then, and was beginning to be cold, bored and fatigued.  The final mile was neither fast nor pretty, but I stuck at it and lo!! My first half marathon!  I got home and celebrated with a warm bath and 20 minutes of lying flat on my back with my legs propped against a wall, taking the pressure off my legs and allowing my poor feet to breathe (under close supervision of Olaf, the crochet mule!)

I was not content with one triumph in the weekend, though. Oh no!! On Sunday, at my very much needed yoga class, I managed a crow pose – after only a year of trying!! So now, I can run a half marathon, and balance on my hands.  Verily there is no stopping me!!

Except there is.  This week has been an unmitigated disaster, so far… no runs completed, no nutritional rules kept, not a great deal of anything very much.  Work is ridiculous, the weather is cold, and the excuses are poor.  In truth, this is week 9 and my boredom is rising.  However, I *will* run tomorrow – probably on a treadmill, but even still.  And then I will be back on it, and unstoppable.  Again.

*** Company on runs – planned and unplanned.  Running in company makes a big difference