It’s week 15…. or week eeeeep!…. and I’m surprised by how calm I’m feeling.  I truly was expecting to be more stressed.  I’m tapering – which means running in short, sharp bursts – and resting.  Marathon day is a mere 10 days away, and I’m feeling….. well.  I’m feeling ready.

I had a little worry, a week or so ago, about not having done enough.  My longest run has been 15 miles, and I’ve watched various Facebook groups talking about going out for their 20 mile run, or the necessity of breaking the 21 mile psychological barrier, and I wondered…. have I done enough?? Is 15 miles going to get me through?

I did two things.  I asked my own training group, which has plenty of experience.  And I got lots of lovely, sensible supportive answers ranging from “my longest run pre Brighton was 9 miles.  Pigheadedness got me through.  You’ll be fine.” (from someone who has obviously identified my dominant personality trait…); through “When running a marathon I always say to myself when crossing the halfway point that I have my medal now, as I can always walk the second half if things went wrong and I had to. You’ll finish, even if it’s slower than planned and will have a nice medal hanging up on your wall to show for it! Good luck!” (I like this idea a lot.  I know I can run a half!); to “I’ve done 45 marathons/ultras and I’ve lined up on very few occasions feeling that I’ve done everything I could have done. In my humble opinion if you can run 15 miles in training you can get through a marathon. Just be sensible at the start and don’t worry about people passing you, you’ll see most of them again later.” 45!!!! Bloody hell.  That’s an opinion that commands respect!

So then I looked over my training records.  I’ve been running up to 30 miles a week for most of the last few weeks. I’ve run two half marathons within 7 days of each other.  I’ve run fast and I’ve run slowly. I’ve run in all kinds of weathers.  I’ve run when I’m tired, and when I’m well refreshed.  I’ve run up hills, and down them again.  I’ve done many, many kinds of running that I just wouldn’t have had the guts to do, six months ago.

All I have to do is repeat *some* of that in one day.  Not all of it.  Only some of it.  I have to put those two half marathons together.  I have to run slowly, and in a considered way.  And once I’m half way round, I have to relax – that medal is mine.  It may not be an easier second half, but it’s entirely achievable.  As is the first half, because I’ve done it before! 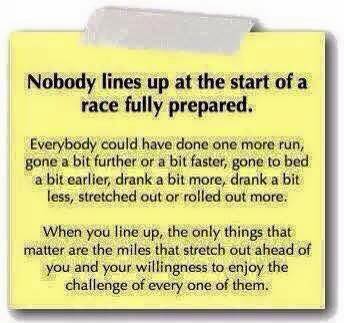