Yesterday, I set out with my lovely neighbour, Kirsty, for another race.  Our races together are characterised by not taking things entirely seriously.  Our training for this race consisted pretty much solely of last week’s cross country shenanigans round the local woods and farmland.

This week, I’ve done a little running – 5km on Thursday – and a gym assessment with my new PT. 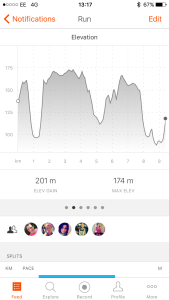 The race was the Cancer Research Chilterns Tough 10k, at Hughenden Manor in High Wycombe.  The course was billed as hilly cross country.  Faithful readers will recall that my two least favourite things are hills and, erm, cross country.  So this was always going to be one to look forward to…. not.  I kept looking at the elevation profile, and telling myself that it was simply a compression issue – the hills wouldn’t be *that* bad.  They would stretch out to be far shallower, over a whole 6 miles.

I was so not looking forward to the run that when Kirsty said she was going to a leaving do on Friday night, I quietly hoped that she’d get lashed and pull out.  My hopes were compounded by a truly biblical weather forecast.  Our own Friday evening was spent at a school prize giving, with a quick dirty Dominos order and a can of cider – definitely sub-optimal fuelling for a race.  But it was only 10k, right?  And the hills would really be a *lot* shallower than that, right….??

So we got up early, and set off.  Kirsty is always brilliantly prepared.  She’d made a packed lunch, with a thermos of coffee and another of hot ribena.  I’d thought as far as a bag of dry, warm clothes.  No food. No drinks.  I did, at the last minute, dash back into the house for some money.

We giggled all the way to High Wycombe.  In particular, we were amusing ourselves with pole fitness; I’d had a brilliant conversation at work with our accountant about pole fitness, which he hadn’t realised was a thing.  I confessed that I’d suggested to Mr P that we could put a pole in our living room. He wasn’t keen, and neither Kirsty nor I could really work out why – it’s not like I’d be firing ping pong balls from my fanny… For some reason, this thought had us in stitches all the way to the A404.

The race instructions were very clear that there was no parking at Hughenden, and so we hit the Handy Cross park and ride, reassured by the presence of other people in running gear, and found our way to the transfer shuttle.  On the way we picked up Anique, who also wasn’t sure that she was in the right place.  We discovered she was a novice – having given up smoking in January, this was her target race and her first 10k, and she was a bit worried that she’d only r 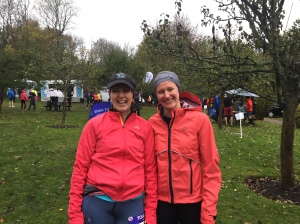 un 5k up to now.  I reassured her that I hadn’t run 10k in a while, and it would be fine – the adrenaline takes you through.  I hoped fervently that this was true.

At Hughenden, the weather was biblical.  Lashing rain, a cold wind, and a sorry huddle of runners. We checked our bags into the tent, and hung around… and hung around.  Unfortunately, there’d been some kind of ‘police incident’ which meant that the course was being re-routed between 3k and 5k, so the start was delayed.  Runners huddled, and jumped, and hugged themselves trying to keep warm.

Eventually we were off.  All I can tell you is that the elevation profile didn’t lie.  The first mile is always a bastard, but by the end of 2km I was about dead on my legs.  Luckily we hit a flat part and some downhills soon after that, and things began to look up.  And so the pattern was set.  Kirsty ran *up* the hills, and I ran *down* the hills and Anique, who was a total bloody superhero, ran up some hills and down some hills and between us we had the Grand Old Duke of York knocked into a cocked hat!

By 5km I was hungry.  Seriously hungry.  I kept myself going by singing songs about coffee and bacon, and at the water station at 7km I grabbed some energy gels and told myself they’d keep me going.

There were a couple of bastard hills around 7km, and some tricky, narrow, root-laden slippery muddy downhills.  So much fun on the downhills.  And then the finish, which was almost vertical.  Seriously not funny.  I *so* nearly quit with 200m to go.  I just didn’t have another hill left in me.  My hamstrings were screaming, my lungs were screaming, I was hangry and everything hurt.  I developed a fabulous “walking while frantically pumping arms” technique for the finish-line photographers and forced myself over the finish line. 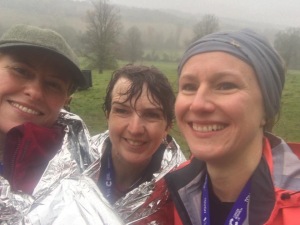 ar, a drink and a packet of popcorn.  And a foil blanket – essential, as I was wet through and cold.  I wolfed the granola bar, drank the lucozade.  We took some final photos, and set off to pick up our bags.  The finish line was downhill from the bag drop, so we dragged our sorry legs back to the bags, and joined the queue for the shuttle bus.  Stupidly, I didn’t get myself the bacon and coffee I’d been promising myself – I thought we’d get on the bus quickly and be back at the car and the Waitrose cafe before long, and I could get warm and dry and eat something proper.

We waited the best part of an hour for the bus, in the cold and wet.  There were two buses operating alternately, and I’m sure they came and went as quickly as they could, but with two drop off points in a busy Saturday town centre, they inevitably took a while.  So we struggled to keep warm, and we waited. 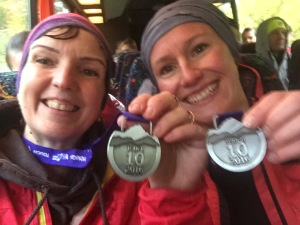 I’m making a bit of a meal of this, in retrospect.  We had a lot of fun, chatting, giggling, talking to other runners.  I stripped off and put some dry clothes from my bag on, which helped a little.

The summary of this is that, actually, for all the race was a bit of a personal suffer-fest, I enjoyed it.  I will definitely do more trail running.  The hills were brutal, but I know the solution to that – training.

What really fucked me over, frankly, was my own lack of sense.  I fuelled *really* badly.  I hydrated poorly.  I got home, had a hot bath and went for a nap.  That was also foolish. I should have eaten something when I got home.  As a result, I’ve spent the last 24 hours with severe flu-like symptoms – horrible shivers, nausea, aching kidneys, headache.  And a bit of the DOMs in my thighs – but that’s good and to be expected.

The lesson, then, is train better, and take the fuelling more seriously. I know the theory.  I have to apply it to myself, rather than simply tell other people how to do it!! Tomorrow, I’m going to go and buy myself some probiotic, to make sure I recover properly from this nonsense.