On Sunday, it’ll be 8 weeks till the marathon and one week until Warwick Half.  This is my ‘de-load’ week.  I’m scaling back the amount of running this week, to allow my legs to rest and consolidate all they’ve learnt over the past few weeks.

Last week, I was mostly in Lincoln.  Which meant I didn’t get to the gym, and so didn’t do any body conditioning.  The big difference in my training this year over my training last year is the amount of weights work I’m doing – my whole body is stronger, fitter and more powerful than it was this time last year.  To compensate for my lack of gym time, Becky had me do a bit more running than a standard week.  The beauty of Lincoln, from a running point of view, is that it is absolutely pan flat.  I did some lovely interval runs around the Skellingthorpe Road/Birchwood Avenue/Tritton Road block, and a longer, tempo run by extending out to Doddington Road, to the East.  In total, including my Sunday run back in Witney, I ran 38km last week.

De-load week is a good time to look back and make comparisons.  At this point in last year’s training, I ran 20.2km in the week, according to Strava, and my core fitness score on Training Peaks was 35.5.  Today, my core fitness score is 41.4 (at the point at which I ran Brighton Marathon, the score was 44.4).  Now, I can never remember how this score is calculated, but it’s something to do with distance, time, heart rate, intensity and training factor all combined.  So all in all, an increase is a good thing.  8 weeks ahead of my goal, I’m about as fit as I was when I ran my marathon last year.  This is a hugely confidence boosting fact-I-don’t-quite-understand.

Apart from running a *lot* of kms, comparatively fast, in Lincoln, I’ve had several other moments of feeling qu 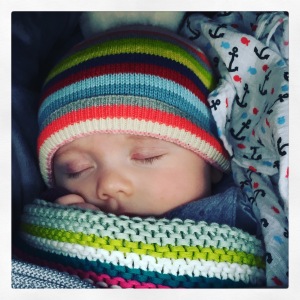 ite accomplished, lately.  The weekend before last, we were away with my daughter, her husband and my grandbaby, and I plotted a hilly long run route which I then ran.  No fuss, no bother.  Nothing exceptional, you may think.  Except that usually running unfamiliar routes in unfamiliar places provokes an inhibiting level of anxiety.  Throw in a hill, to boot, and there is normally walking.  But not that weekend….
Although it *was* cold, and I *did* have this little smasher waiting for me when I finished…

So I went into the week feeling confident and positive and strong.  And last weekend’s long run was a 9 miler.  Again, no particular biggie – I’ve run further than that, before! But it’s the first properly long run since my mojo returned, and it felt comfortable and even, dare I say it, enjoyable.

My target, now, is to up my protein intake and limit/eliminate sugars and processed foods.  They’ve crept back into my diet, which means there’s a little layer of fat in places there really doesn’t need to be.  This isn’t going to be a priority, this side of London.  If I have to drag a couple of extra kilos round the course with me, so be it. I don’t want to compromise my progress by running depleted, at this stage.  But they have to go before the Ultra.  By the time I get to Great North Run in September, I want to be lean, fit *and* strong!

So I am feeling invincible.  Tired, but capable and strong.  I’m over halfway to my fundraising target; I’m fitter than I was at the end point last year; and all in all it’s been a pretty bloody marvellous couple of weeks.