Two sleeps.  Or two not-a-lot-of-sleeps.  We’re heading down to Greenwich tomorrow to pick up my race number and spend the night pretty much as close as we can to the start line.

I am nervous.  Actually, probably more nervous than I was before Brighton.  I know I’m hurt, and I don’t know how it’s going to hold up.  But I’m going to start – I’d be way more disappointed with a DNS than a DNF and, because I’m running on a silver bond ticket, deferral simply isn’t an option (and I don’t want to do another spring of training, anyway).  I know if I start I’ll finish – out of sheer stubbornness if nothing else! I think I’m going to run with a pace group – I can’t decide whether to go with the 5 hour group or the 5:15 group, but in my heart of hearts I don’t think I’m fit enough for the 5 hour group – I know the first few miles are going to hurt, and I don’t want to be over-exerting myself in that early pain.  I just won’t have the mental strength to keep it up! The 5:15 group is a 5 minutes jog, 1 minute walk group.  Not quite what we had in mind at the beginning, but still a respectable time (and an improvement on Brighton) so I’d actually be thrilled skinny to finish in that time.  So that’s decided, then.  5:15 group it is!  And if all goes well and I can pull out some extra late in the second half, then that’s what I’ll do.

If you’d like to follow my progress, you can download a tracker app here – be aware that it sometimes is slow to update, so don’t automatically assume that I’ve been stood still for ages! But if you do think I’m struggling, feel free to text me messages of encouragement!

I’ve had an extraordinary training campaign. Up until I got hurt, I was achieving things I would never have thought I’d be capable of! And I’ve really enjoyed it.  This week has topped the whole thing off with a beautifully surreal flourish.  We have featured as family of the week on BBC Radio Oxford’s breakfast show, culminating with us spending a couple of hours in the studio en famille this morning (see picture)!  That’s been an enormous privilege and really good fun.

My fundraising target was originally £1,250.  Well we’ve reached double that – you’ve reached double that, you lovely people! I’m currently sitting at £2,633.90! That’s a phenomenal amount of money for Dash, and will make a real difference in the lives of people escaping or recovering from domestic abuse.  I can’t believe your generosity – I’m truly humbled.  It would be fantastic if we could just push it that little bit further to £3,000… so if you haven’t sponsored me yet, please do think about it. You can access my sponsorship page here. 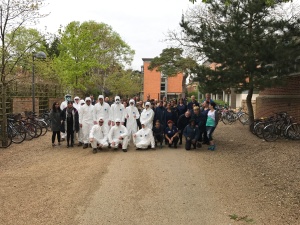 s usual, been phenomenally supportive.  We had a virtual marathon, today –  51 people each paid £4 to walk 1km around the perimeter of College, and then came and indulged themselves in a bake sale.  We split the proceeds between Dash and  a children’s hospital charity which a group of staff are supporting.  Each charity received £128.14 from that, and a lot of fun and laughter was had along the way.

So, I’m not feeling ready.  But I’m feeling proud, and determined.  It’s going to be an enormous amount of fun – and probably a bit of an emotional roller coaster.  I’m looking forward to getting under way and getting it over!

Thank you all for your support.  It’s a fantastically good cause, and you are all wonderful, generous people.