Oh, my! Well that’s one to tick off the bucket list, for sure…

I set off for Greenwich Park at about 8:30, to find a sea of people also heading for the red start area.  I don’t know why I was surprised; with almost 40,000 runners, it was never going to be short of traffic!

The morning was warmer than I’d anticipated and I was overdressed in my kit, a hoodie and some old track pants.  I pulled the hoodie off as I stepped through the entry to the start zone.  A photographer shouted “Vicki! Look over here!” and I genuinely spent 5 minutes wondering how he knew my name…. 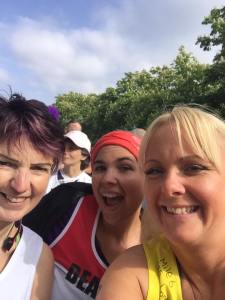 I found the 5:15:00 pacer – a lovely man called Paul who explained to  the gathering pace group how he was going to operate.  I buddied up with Deanna and Corinne and we agreed to have each other’s back for as long as we could.

It took us about 25 minutes to get across the start line, after the klaxon sounded.  We set off at a very comfortable pace, and the first 3 miles were fine – because of the sheer volume of runners, we fell a way behind the pacer, but he was comfortably in sight and we weren’t losing ground on him, so I was happy that the strategy *could* work.  I enjoyed running through Blackheath – it’s been a long time since I was at school there.  We ran past the new junior school, which looks very impressive.  Coming into Woolwich we merged with the blue start and the volume of runners amplified.  At this point, I lost the pacer – it was simply too hard to keep up with him when the crowds hit.  If you’re reading this with a view to learning some pacer strategy my advice would be stick to your pacer like glue for the start.  Otherwise, the crowds make it simply impossible.

I was all good for the first 10k, a little short of my target times, but only by about 2mins so I was confident I could reel it back.  The hamstring pain came and went.  I slowed a little when it was sharp, and tried to place my feet to minimise it – which caused my right calf to join in the pain fest, later on!  By about 14k, though, it was unavoidable and I began to deploy a walk/run strategy in earnest, running 5 mins and walking 1 min.  Becky was there for hugs and hellos at mile 9 and 11, and was great for keeping me focussed and encouraged.

My strategy was still working up to about the halfway mark.  I saw my brother-in-law and nephews just after mile 13, I think, and had my first proper weep hugging them (sorry for clobbering you round the head, Joe!).  Then Iain and Kirsty were at mile 14 or 15, and we disappeared onto the Isle of Dogs.

Jesus.  I cannot tell you how endless the Isle of Dogs is.  I’m sure it’s a lovely place, but really… endless.  My hamstring began giving me serious aggravation somewhere here, and the second toe on my right foot was hurting (probably from trying to fettle my foot placement) and the run/walk strategy began to be more of a walk/walk strategy.  It was warm  – warmer than I’d expected or dressed for – and there was very little shade.  I managed to run for Becky and Iain, but there was in truth very little running going on – the best I could manage was a pretty determined stride.  I’d met a woman called Rhona running for Muscular Dystrophy, and we’d agreed there was just no point quitting after the halfway point.

Towards the top of Isle of Dogs – mile 18? – I stopped with Iain and Kirsty, and put a compeed plaster over the end of my second toe.  Turns out this was a huge mistake, but that’s what I did.  The Run Mummy Run support crew at mile 19 were LEGENDARY and produced my second major weep.

By mile 20 I knew I was at least an hour outside my post-injury target and in a world of absolute pain, but I also knew I could put my head down, suck it up, and finish.  I saw the Dash support crew at mile 22, who produced the third weep of the day!  It was so fabulous to see them – and I’m only sorry they had to wait so long!

I went past Becky on the approach to Westminster Bridge at Mile 25, and she encouraged me to get running again.  By this time, most of the field I was in were walking and running produced the most amazing roar of support from the crowd, so I kept going, and kept going, and kept going.  I ran past Iain and Kirsty (didn’t dare stop for a hug, in case Becky could still see me!!)  There was a brief walk, at the 1km to go mark, while I recovered my composure and gave myself a stern talking to.  At 800m to go, I was running again, and trying to pose for the cameras! Well, I had to salvage something out of this!!

Just as I hit the 400m barrier, my toe exploded.  Honestly, that’s what it felt like.  I screamed, swore, and slowed to a hop.  It was excruciating.  It really did feel like the end of my toe was inside out.  But I did the ‘experiment with foot placement’ again, and got it to a point where it was only pain – and ran over the finish line!

I managed not to cry on the lovely volunteer who gave me my medal, and even produced some vaguely cheerful medal pictures, in start contrast to the Brighton one!  Then there was a long, slow hobble to pick up my kit bag from the lorry, and I swear the 400/500 yards to my friends at the S meeting tree were roughly as long as the whole bloody marathon! I so desperately needed to take my shoes off!

Dash were there, as were Iain, Kirsty and Becky.  There were hugs, smiles, photos, an amazing gift from the charity, and the discovery that the ‘explosion’ was my toenail popping off the nail bed at the cuticle – I imagine in retrospect it was pulled off by the compeed plaster as it bumped on the end of my shoe.

So I did it! And we raised £3,257.90 – an amazing achievement and I’m so grateful to all of you who donated! If you think my poor missing toenail is worth a few pence extra, then you can always top it up here.

So.  I started this adventure disappointed with my Brighton performance and determined to run a marathon ‘properly’.  I trained hard and well – I was focussed and following a proper programme with a really good trainer.  I am fitter than I’ve ever been in my life.  But I got injured.  And then I did it anyway, and produced a far, far worse result than Brighton.  I’m not disappointed – I did the London marathon! I started it with an injury and I finished it.  The message I’m taking from this is that marathons are not for me… I always said I’d never run one, and now I’ve “run” two, so I have empirical evidence that they really aren’t my thing.

My new target is to get faster over 10 miles, comfortably, and own the world of the half marathon.